I have been toying with Java game code for a few years now, entered a few game jams and started multiple projects that are all on hold, this has all been a learning expereince but it is time to create a game how ever long that takes! With a young baby to care for I only find the odd hour to write code.

I would like to make a top down shooter, inspired by retro games such as Chaos Engine, Universal Warrior, Micro Machines, GTA 1 but also newer titles like Nuclear Throne. At the moment I have the start of some systems; vehicle (7 types), lighting, chunk/map, player, inventory and time.

Box2D is a great 2D physics engine ported to LiGDX, I followed this tutorial to make a vehicle, well a box with 4 wheels that sort of acted like a car. Here you are seeing two scenes being rendered, Box2D’s debug renderer showing the outlines of bodies and also a separate 3D camera overlaying 3D objects:

I then created some vehicles to replace the debug lines, these are just concepts at the moment and need work: 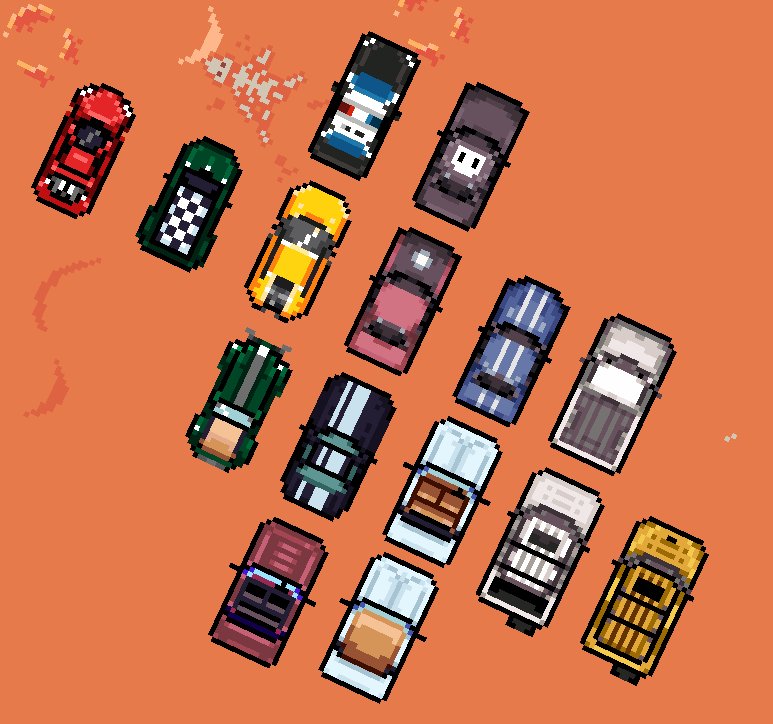 I have never really played with 3D but as I only really need to use 3D as a visual overlay its not too difficult. I implemented a cube builder which creates a cube made up of many other smaller cubes, the function shown here generates a cube split by a random number, I considered a Minecraft style method of building the environment, tested out culling/caching models so this would run for large cities. Once I have a clearer vision for the style of the game then I can create some 3D objects and texture/skin them.

Damage is not currently visible but I have deferred the Box2D listener events to the car class collision object, this captures what was collided with and the speed of the collison. I then got carried away with Box2D joints and started to make all sorts of weird trailers and trains but only shared the caravan, it handles terrible but will have some purpose in the game:

Next I experimented with lighting, Box2D lights is simply to use and works well with Box2D objects had some fun revisiting trig to calulate the position of the light in relation to the car:

Not sure the lighting suits a pixel art game, I posted on Java Gaming for some advice with Nuclear Throne style lights, Orange Pascal the developer behind so many great games (orangepixel.net) linked me to a tutorial he had posted, I have not really experimneted much with this but it works. There is a day/night cycle in place at the moment, I have to keep the 2D and 3D lighting in sync to achive this but that is pretty straight forward.

This is all I have at the moment, had a lot of fun prototyping, a long way to go but feel this is worth this is the type of game I would like to commit too.